Most Common Types Of First-Class Travel

First-class travel is also the most luxurious class of travel. It has a price tag that matches the extravagance. Every type of transportation mode has its first class.

First-class travel is normally related to air travel, but all other types of transportation have it as well. Trains, passenger ships, busses, and even cars offer it.

When we compare first class to business class and economy class, it is the most comfortable out of the three with the best service.

As we mentioned before, the most common types of first-class travel are:

The location of the first-class seats is usually in the front part of the airplane. These seats have more room, comfort, privacy, and the best service.

First-class travel in an airplane includes seats that can be converted to beds. Big flat screens, free drinks are also a part of the deal. Etihad Airways has introduced suites with a butler, en-suite shower, and even three rooms.

This type of luxury is amazing, but it comes with a big price tag. We are talking about tens of thousands of dollars for a one-way ticket.

The classes in air travel are well defined now but that hasn’t always been the case. 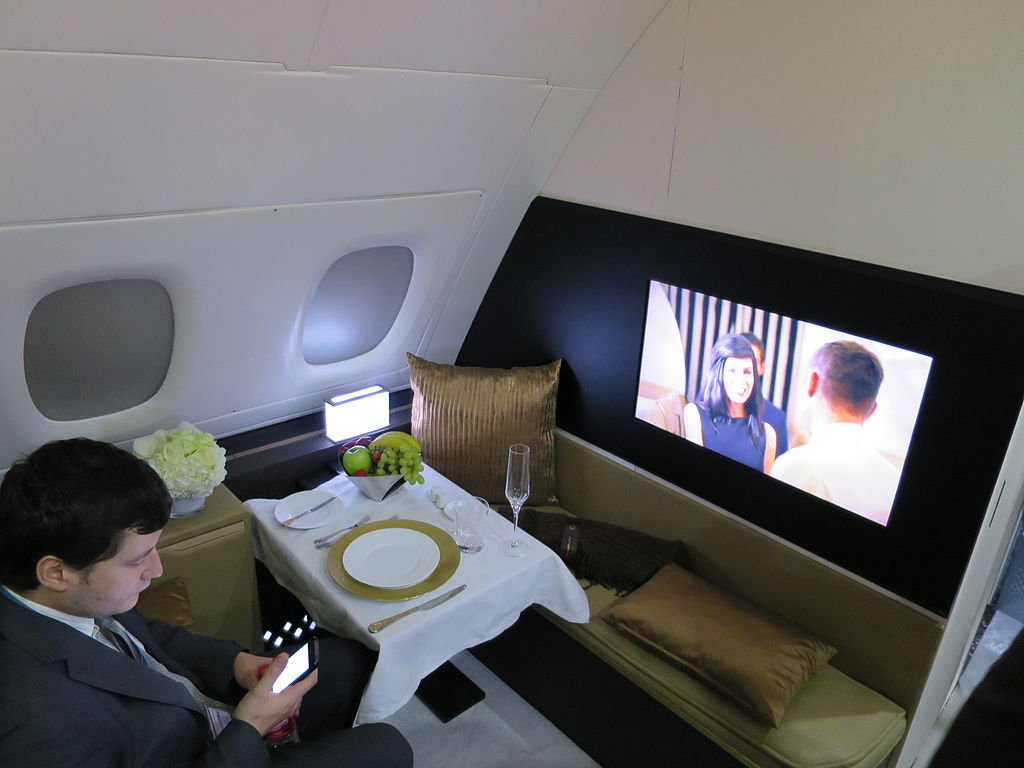 In the past when commercial air travel started, it was all first class. Only very rich people could afford it. In 1930, people who were flying expected beds in the airplane. The twin-engine Douglas DC-3s were used.

After WWII, many military aircrafts were redesigned for commercial travel, such as Boeing 377 Stratocruiser.

This is when a new definition of first-class air travel was introduced. Since there was more room, the passenger cabins got bigger and fancier.

It also had a lower deck beverage lounge and hot meals for up to 100 passengers. Upper and lower bunk units made the journey more comfortable.

During the 1940s, airlines wanted to earn more money and introduced cheaper tickets. Some companies attempted to implement four-class type tickets, but the distinction between the first and the economy was the most common.

With time, air travel evolved, together with it so did the first class up to a point when the need for business class appeared during the 1970s.

It is not definite which airline introduced business class first. Some say it was British Airways with their “Club Class” in 1978 the others say it was Qantas in 1979.

In the present age, the line between the first and business class is blurring. Some airlines offer full beds only to first-class passengers, while others offer them to business class too, together with all other perks of first-class travel.

The differences between the two are visible on the ground where those traveling first class have limousine pick-ups and VIP table service. They can board the plane directly from the lounge and get complimentary spa treatments.

It truly is traveling on higher ground.

Just like planes, trains have different class tickets. There is the first and second class.

The first-class tickets offer wider and in most cases plusher seats with more leg and elbow room. The lounge area is the same for everyone. There is no difference between first class and second class holders.

In some countries, the first-class ticket entitles you to a hot or cold meal, depending on the part of the day and the length of the journey.

Some train stations are equipped with first-class lounges. First-class ticket holders can eat and drink for free in these lounges, alcoholic beverages are included.

But was first-class rail transportation always like this? Let’s check its history. 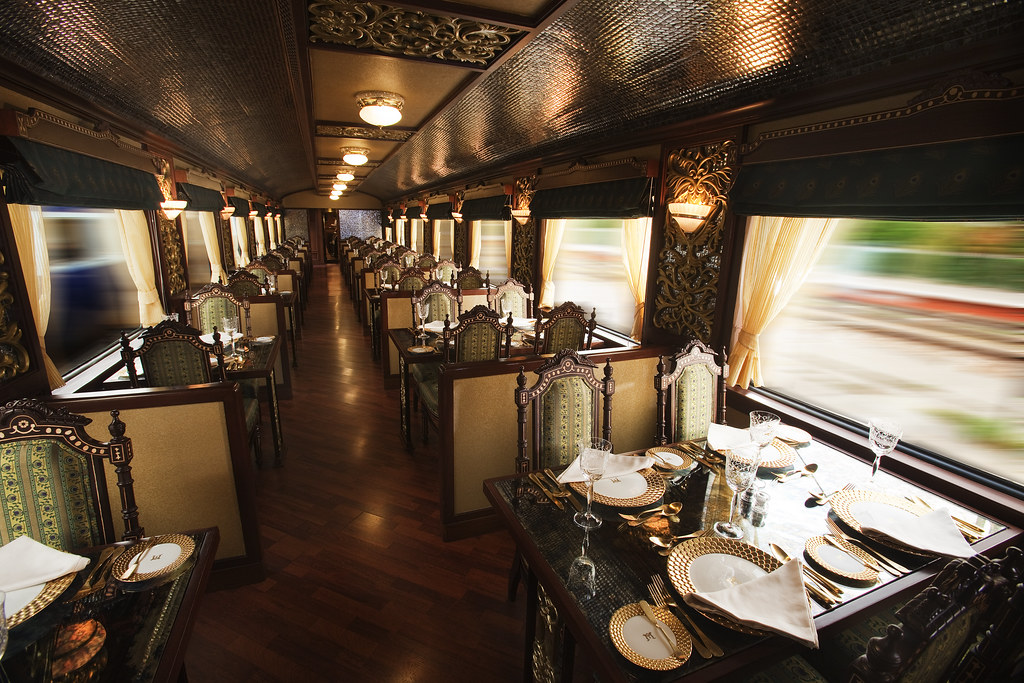 The rail first class of the past

Originally, trains had three classes. The third was usually in the open air. Some who could afford the first and second class chose this one instead when the weather was nice.

In the past, train travel used to be a lot fancier. People would dress up for a train ride and consider it an exciting event.

The inside of the first-class cabin looked like a lavishly decorated living room. It included carpets, drapes, and armchairs.

People could listen to gramophones and radio. They would eat out of fine china in separate dining saloons. To pass the time first-class passengers would read newspapers or play cards.

It truly was a different era of travel.

Cruise ships have tickets with different classes as well. It has gone the long way from what it was in the past, think about the differences between first class and third in the Titanic.

All areas are generally open to all passengers on board, but first-class seafarers have some big privileges.

Again, the first-class comes with a price tag that matches, but it offers a lot.

Some of the perks of traveling first class in passenger ships are:

First-class passengers of big cruise ships get their floor. To get to it you will need a special keycard that only those traveling first-class receive. Since not everyone can get there it is less crowded and more peaceful and quiet.

Some cruise lines have personal concierge for their VIP passengers. They make the vacation even more relaxing by coming up with things to do daily.

Concierge’s job is to listen to the needs and preferences of the first-class passengers. He or she would suggest activities, make seating arrangements, or even book a massage.

Personal concierges are the ones who help to make the most out of your vacation.

The first-class ticket entitles you to shortened wait times when embarking or getting off the ship. It leaves more time to have fun and reduces the stress of waiting in line next to a lot of people.

Many cruise companies provide restaurants that are only available to first-class passengers. This ensures comfort and a full belly with zero waiting time.

The cabins first-class passengers get are similar to standard rooms. They can have an ocean view as well. Some cabins are specialized for couples and some for families. The prices of these cabins depend on the size and the number of beds. 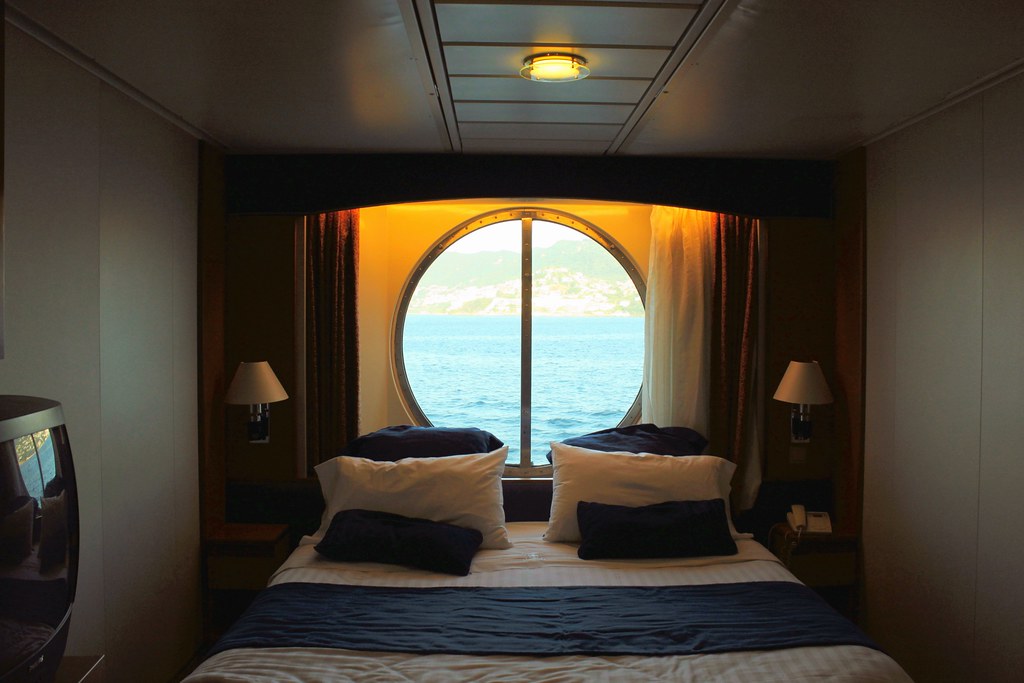 Radiance of the seas – first-class cabin

Glamorous first-class cruise ship travel of the past

In the past, when traveling by air was not very common, cruise ships were used to travel long distances. People would spend weeks and months on these ships before they reached their destination.

If you could afford the first-class ticket, the journey on these trips was truly your destination.

The first class of a cruise ship was located on the upper decks. This part of the vessel was built with many details in an attempt to look like the best hotels on dry land.

With many embellishments and stunning architecture, sometimes people forgot that they were in the middle of the ocean.

Since the journey lasted for up to several months, ships even had gyms. They were equipped with onboard pools as well.

To pass the time people would play various games, such as badminton or tug of war. They organized boxing matches and egg and spoon races.

For the first class, dinners were very long events where everyone dressed up. Women would wear stunning dresses and men were dressed in tuxes.

They would dine in king-worthy dining halls that had intricate murals on the ceiling. Drinking was the favorite hobby, everyone was doing it.

Today’s cruise ships resemble floating malls. They have almost everything from planetariums to zip lines, but they lack the elegance of the bygone era.

When you were reading this article you may have wondered if there is such a thing as first-class bus travel. We are here to tell you that there is.

Many limo companies offer limo buses to their customers. These buses are not crowded, nor uncomfortable. They are very clean and comfortable.

Some companies offer luxury buses that are not that luxurious. Minimal improvements do not mean that the vehicle is a luxury one. Listed below are the amenities that most first-class buses have.

Adding to these, the major difference between regular and luxury buses is the number of seats.

The first-class bus has fewer seats than the regular one. These seats are very luxurious. Very often they are upholstered with leather and bigger than usual.

Fewer seats mean more space. This allows for expanded legroom and seats that can recline so that one can rest comfortably in them. Most companies convert their buses so that they have approximately 27 seats instead of 50.

Luxurious busses have one or more private bathrooms. Some have kitchenettes with a fridge, sink, and microwave. There is a bar too.

Some luxury buses have been converted to sleeper buses with beds so you can rest during your journey.

They are best described as moving hotels. Riding in these you can spend the night sleeping and travel at the same time.

They have a sleeping and lounge area. In the common area, there is a small living room with a big TV and most often a kitchenette.

The amenities of sleeper buses

Sleeper buses have most of the features a traditional luxury bus has and some more. These are:

This way of first-class travel is gaining in popularity. It means less time waiting in the airports and the ability to spend the night.

Many people who travel for work between big cities love luxury buses. The most common types of limousine car

When people say limousine people immediately think of classic stretch limousine. But there are different types of limousine cars. Those are:

As you can see there are many different vehicles that can be called limousine. Choosing the right one for your occasion is like choosing clothes to wear. Not every limo is suitable for every occasion.

Stretch limousines are mostly used for weddings, proms, and such events. Long sedans and sedans, in general, are used by businessmen when they travel. You can rent them for a romantic dinner or when you want to impress someone.

Limousines have all the perks of first-class travel. They have extra roomy leather seats. Free Wi-Fi is also included in the package.

Air-conditioning is there for the hot days of travel, heating for the cold ones.

You will never get bored when you travel in a limo. Most of them have flat screens and you can use them to play video games, watch movies, or simply listen to music.

They can take you anywhere you want. We would recommend these luxurious places you can vacation in with your family.

From airplanes to limousines, first-class travel reaches all modes of transportation. It always provides extra comfort for those who can afford it. It has changed, evolved through the ages but it has always represented opulence and glamour.